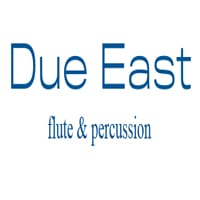 The duo has performed in China, Brazil, Europe, Canada and the USA at venues such as the Beijing Modern Music Festival, the Warsaw Crossdrumming Festival, the Banff Centre for the Arts and the SEAMUS conference. DUE EAST has given multiple performances at the Percussive Arts Society International Convention and won first prize in the 2008 National Flute Association Chamber Music Competition.