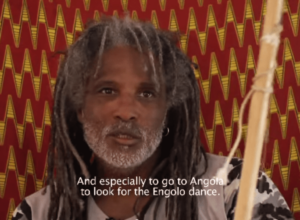 Mestre Cobra Mansa is a scholar and historian in addtion to being an exceptional capoeirista. He has created a full-length documentary film, shot in Angola, tracing the routes of Capoeira Angola to its namesake country. Much of the footage takes place in various locations in Angola.